The Awards Programme of the IEEE Toronto Section

The primary emphasis of the Toronto Section awards programme is to provide scholarships to students in local post-secondary educational institutions where there is a demonstrated pattern of IEEE activity and an effective
IEEE student branch. Additionally, members and volunteers participate in the awards program of IEEE Canada and IEEE.

Members and volunteer leaders of the Toronto Section are elegible to be
nominated for various awards and recognitions administered by IEEE
Canada through its Awards and Recognitions Committee.

– click here here to view the listing of awards and recipients

The IEEE Toronto Technology Award is meant to recognize the outstanding technologies developed by private-sector companies in the Greater Toronto Area. Technologies are judged not only on the basis of their degree of technical innovation, but also through their potential for social benefits, such as improved quality of life, reduced waste, reduced inequality, reduced negative environmental impact, job growth, etc.

Learn more about this award and submit nominations here.

The IEEE Toronto Section supports the education and training of undergraduate
engineering students through a series of scholarships. The scholarships are available to
students in the colleges and universities that are affiliated with the IEEE Toronto
Section.

Application Deadline: August 15 th , 2020
Award winners are contacted: Sept, 2020
Award Distribution: IEEE Toronto Annual General Meeting in Nov. 2020 (winners must
attend in person)
The scholarship seeks to encourage students to strive for both academic and real-world
design excellence, and also to encourage students to reflect on the goals and impact of
the engineering profession. The selection criteria emphasize your vision for the
engineering profession, how you are preparing for the technical challenges of the
profession, and also how you perceive the social implications of engineering. Due to low
word-count limit in these questions, you should focus on the aspects that are most
important to you.

Eligible Institutions in for 2020 (based on the good standing of the IEEE Student
Branches):

More information for the application: https://forms.gle/FHLjjsczdYHjBbav7

Awards and Recognitions Received by members of the IEEE Toronto Section

Awards and Recognitions Received by the IEEE Toronto Section 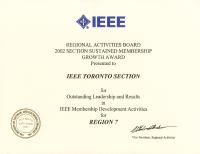